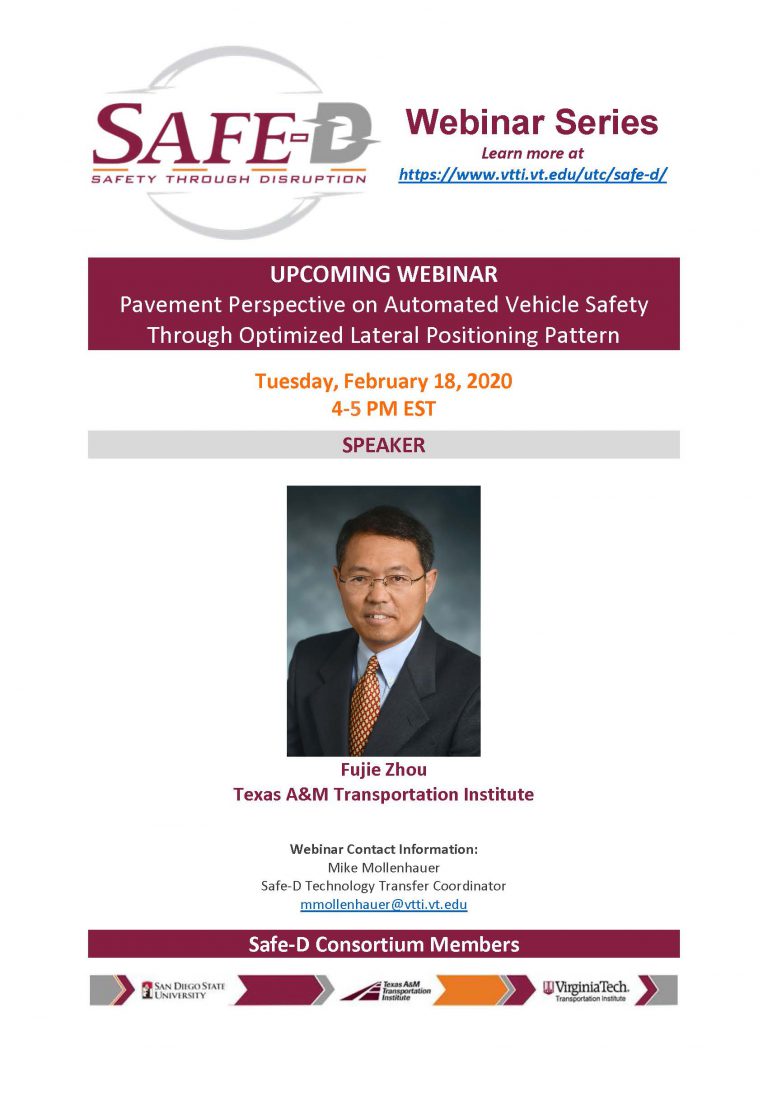 Please join us for the next webinar in the Safe-D Webinar Series, to be held February 18th from 4-5pm EST.

Deployment of automated vehicles (AVs) has many benefits, such as reduction of congestion and traffic accidents, increased lane capacity, lower fuel consumption, increased transport accessibility, and reduced travel time and transportation costs. However, one aspect of AVs that is worthy of notable attention is their impact on risk of roadway hydroplaning and pavement life. Since most AVs are programmed to follow a set path and maintain a lateral position in the center of the lane, over time, significant pavement rutting will occur. This study directly measured AV lateral wandering patterns and then compared with human driven vehicles. It was found that wandering patterns of both AVs and human driven vehicles could be modeled with a normal distribution but have significantly different standard deviations. AVs wander laterally at least 3 times smaller than regular human driven vehicles. The influence of AVs (all AVs or mixed with regular human driven vehicles) on pavement rutting and fatigue life was analyzed with the Texas Mechanistic-Empirical Flexible Pavement Design System (TxME). The researchers discovered that the AVs with smaller lateral wandering would shorten pavement fatigue life by 22 percent. Meanwhile, pavement rut depth increases by 30 percent which leads to a much higher risk for AVs hydroplaning. The researchers also calculated the maximum tolerable rut depths at different hydroplaning speeds. It is noted that the AVs have a much smaller tolerable rut depth than the regular human driven vehicles due to greater water film thickness in the rutted wheel paths. To reduce the negative impact of AVs on roadway safety and pavement life, this research recommends an optimal AV wandering pattern: a uniform distribution. Not only does the uniform distribution eliminate the negative effect of AVs, but more importantly, it results in prolonged pavement life and decreased hydroplaning potential.