Formalizing Human-Machine Communication in the Context of Autonomous Vehicles 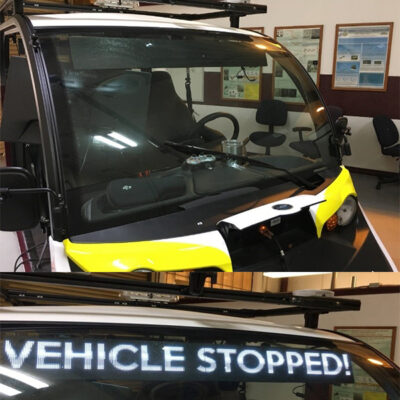 Course CSCE-691-646: Co-PI Shell used the topic of uncertainty-aware planning as a means to realize implicit communication as a basis for a topical discussion on 3-Sep-2019 with the seven students, all registered for Fall 2019’s offering of CSCE-691, section 646 (each had familiarity with Markov Decision Processes; background on the partially-observable case was mixed).

Course MEEN 401/402: Co-PI Saripalli led a group of senior undergraduate students as part of the capstone project. Five students teamed up as part of the MEEN 401/402 course, over a period of two semesters, and built a communication system consisting of LED, Speakers, GPS that can communicate intentions of the Autonomous Vehicle (in this case the Polaris GEM e4) with pedestrians. Design Comparison Photo. The project ended in December 2019 (Jan 2019 – Dec 2019).

Educational aids: Co-PI Shell examined how information gathering is treated in standard formulations, and finally, discussion with application to social settings where the planner realizes communication for interaction was described by the student (Hsu). This constituted a topic for 1.5 hours of time and culminated in a student present (not affiliated with the original topic) expressing that both the application and the non-standard formulation were interesting and novel to him.

The software associated with the DSL was created using the “Meta Programming System” from Jet Brains. The model and generator files are located at this following GitHub repository: https://github.tamu.edu/CASTLab/AV2Pedestrian.git